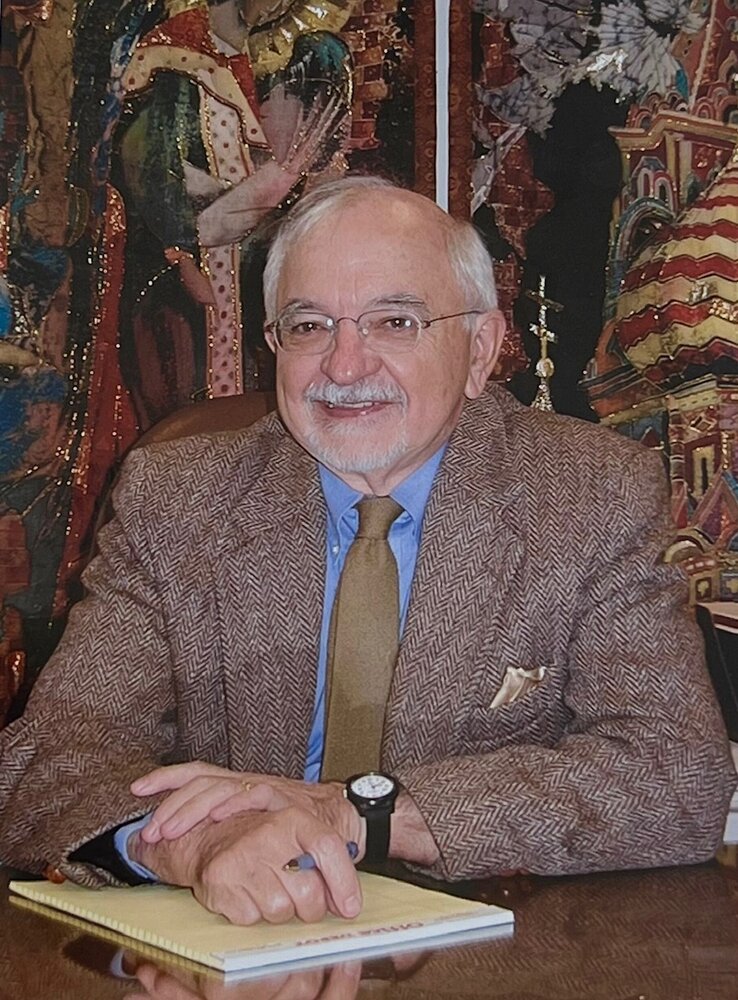 Please share a memory of Jonathan to include in a keepsake book for family and friends.
View Tribute Book
Jonathan Russin, an international business lawyer, died in Washington on December 31, 2022, following complications from a stroke. Jonathan was born October 30, 1937, in Wilkes-Barre, PA, and grew up in nearby Kingston. Graduating from Kingston High School he was awarded a scholarship to Yale, where he earned a BA in politics and economics in 1959 and a Juris Doctor degree from Yale Law School in 1962. In 1962, Jonathan married Antoinette (Toni) Stackpole. Raising four sons, he and Toni lived abroad for much of their lives—in Turkey, Dominican Republic, Spain, and Russia. Jonathan enjoyed working overseas and experiencing new cultures, especially with his family. An epicure, adventurer, and devoted family man, Jonathan was at home anywhere in the world. A habitual reader and lifelong devotee of art, theatre, and music, he passed his many passions to his family, who often gathered around as he poured vodka and spread caviar in honour of being together. During Jonathan's 60-year legal career he advised companies, governments, and NGOs—largely in developing countries—on how to build projects, organizations, and institutions that benefitted their people. His work involved designing and maintaining legal structures for housing communities, industries, cooperatives, schools, hospitals, roads, pipelines, telecom systems, and the like. His purpose: to create these sustainable institutions, which energize free-market economies, which in turn strengthen democratic traditions and freely elected governments. His partnership, Kirkwood, Kaplan, Russin & Vecchi, founded in 1969, was the first Washington law firm to establish multiple offices abroad—in Latin America, Asia, Europe, the Middle East, and former Soviet republics—and to provide client companies with on-the-ground legal advice for their operations. Supervising offices overseas, Jonathan mentored local lawyers, encouraging them to practice law effectively while promoting the ethical rule of law. Raised in the Russian Orthodox Church, Jonathan was especially interested in Russia. He first travelled there as an undergraduate, singing with the Yale Russian Chorus on its first tour in 1958. He then served as a host at USIA’s landmark exhibition, the venue for Vice President Nixon’s “kitchen debate” with Premier Khrushchev. The following summer, as an American Express guide, he led Russian tourists on tours around the US. Years later, with the fall of the Soviet Union, he opened the Moscow office and then moved to Russia with Toni in 1996, living and working there for 17 years. With the rise of authoritarianism under Putin, in 2013 Jonathan returned to Washington, where he continued to advise clients and counsel good causes for another decade. Jonathan’s public service extended to various non-profit organizations. He became a lay leader at St. Nicholas Orthodox Cathedral in Washington and later the principal lawyer of its patron body, the Orthodox Church in America (OCA). He was instrumental in persuading the Russian primate, Patriarch Alexy II, to visit the US and then to send Russian iconographers to decorate the Cathedral’s interior. Alexy would later induct Jonathan into the Order of St. Vladimir. Jonathan served on the board of the renowned cellist Mstislav Rostropovich’s Rostropovich-Vishnevskaya Foundation, and on the board of International Orthodox Christian Charities. Jonathan was predeceased by his parents Jacob and Anne (Wartella) Russin, and his brother, Rodion Russin, and sister-in-law, Jane Russin. He is survived by his beloved wife of 60 years, Toni (Stackpole) Russin; his sister, Ellen Russin and her husband, Michael Cohen; his sons, Alexander Russin and his wife Stephanie; Andrew Russin and his wife Emily; Benjamin Russin and his wife Lauren; and Jacob Russin and his wife Laura; and their grand-children, Janet, Anna, Harry, Jack, and Elizabeth. He dedicated his 2021 memoir, Architect at Law, to those grandchildren and their descendants, “with the hope that they will work to make the world a better place.” A funeral service will be held on Thursday, January 5, 2023 at 11:00 a.m. at St. Nicholas Orthodox Cathedral, 3500 Massachusetts Ave. NW, Washington, DC 20007. Arrangements by DeVol funeral home, devolfuneralhome.com. The burial will be held on Friday, January 6, 2023 at 11 a.m. at Fern Knoll Burial Park, in Dallas, Pennsylvania. Arrangements by Edwards & Russin Funeral Home, https://russincares.com/. In lieu of flowers, the family kindly requests any donations be made to the Rostropovich Vishnevskaya Foundation (RVF): For the Heath of Children https://rostropovich.org/en/who-we-are/our-founders/.
To send flowers to the family or plant a tree in memory of Jonathan Russin, please visit Tribute Store
Thursday
5
January

Share Your Memory of
Jonathan
Upload Your Memory View All Memories
Be the first to upload a memory!
Share A Memory
Send Flowers
Plant a Tree